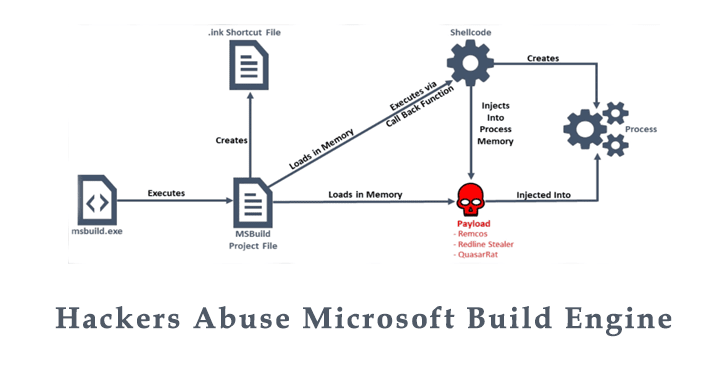 Researchers mention, “It was unable to determine the distribution method of the .proj files, the objective of these files was to execute either Remcos or RedLine Stealer. The majority of the samples analyzed deliver Remcos as the final payload”.

Fileless malware usually uses a legitimate application to load the malware into memory, thus leaving no traces of infection on the machine and making it difficult to detect.

Most of the malware analyzed delivered Remcos as the final payload. Once installed on the victim’s computer, the Remcos trojan allows hackers to remote control, remote admin, remote anti-theft, remote support, and pentest a machine.

What is Redline Stealer Malware?

The other malware observed in the campaign is Redline Stealer. This malware is written in .Net and when installed on a victim’s system, it can steal multiple types of data, such as cookies, credentials, crypto wallets, NordVPN credentials, stored web browser information, and system information.

RedLine will search for the existence of multiple products that include cryptocurrency software, messaging apps, VPNs, and web browsers.

This campaign highlights that reliance on antivirus software alone is insufficient for cyber defense, and the use of legitimate code to hide malware from antivirus technology is effective and growing exponentially. Focusing on cybersecurity training and hygiene, as well as a defense-in-depth strategy, are some recommended courses of action for countering this threat.