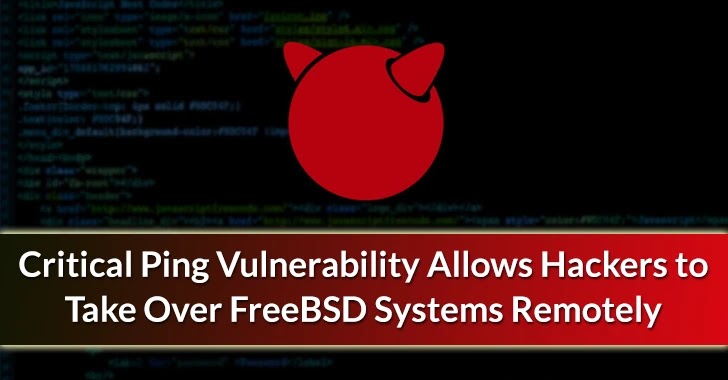 A critical vulnerability in the FreeBSD operating system’s ping module allows Attackers to execute an arbitrary code and take over the system remotely. Developers of the operating system recently released security updates. CVE-2022-23093 has been assigned to the flaw.

It is a stack-based buffer overflow vulnerability in FreeBSD’s ping service that affects all supported versions of the FreeBSD operating system.

Ping is a program that can be used to test the reachability of a remote host using ICMP messages. To send and receive ICMP messages, ping makes use of raw sockets and therefore requires elevated privileges.

In the pr_pack() function, the raw IP packets from the network were read by ping and then processed to produce responses. To facilitate the further processing of IP and ICMP headers, pr_pack() copies the received data into stack buffers.

As a result, IP option headers may appear at either the end of the IP header in the response or in the quoted packet, which is not taken into account.

It is possible for a remote host to cause the ping program to crash by triggering the memory safety bug, which causes the program to crash. Malicious hosts could potentially be able to use ping to trigger a remote code execution via the use of remote calls.

While this finding comes after a new Ping vulnerability has been discovered in the snap-confine application provided with Linux OS by the security researchers at Qualys.

In order to protect vulnerable systems, researchers have urged users to immediately upgrade them to a supported release (releng) of FreeBSD which is dated after the error is corrected.

Since there is no workaround available at the moment to fix this problem, according to the maintainers of the FreeBSD operating system.

There are two methods to update your FreeBSD operating system and here below we have mentioned both of them:-

Update via a binary patch

Update via a source code patch