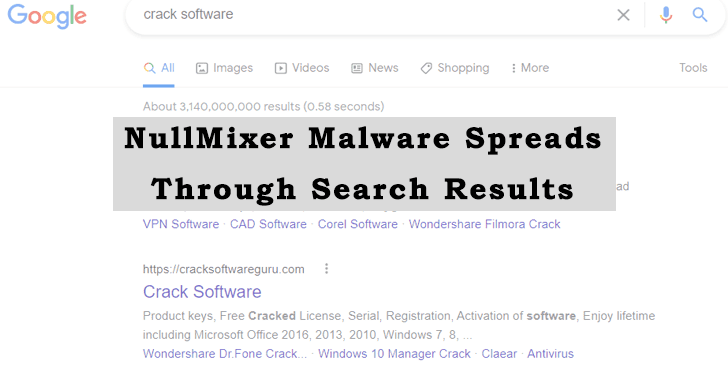 Kaspersky researchers have discovered a new campaign, spreading NullMixer, a malware that is actively distributed by cybercriminals via websites offering crack, keygen and activators for downloading software illegally.

The Infection Chain of NullMixer Malware

NullMixer is a dropper leading to an infection chain of a wide variety of malware families. It spreads via malicious websites that can be found mainly via search engines. These websites are using SEO to stay at the top of search engine results.

“When users attempt to download software from one of these sites, they are redirected multiple times, and end up on a page containing the download instructions and archived password-protected malware masquerading as the desired piece of software”, Kaspersky

NullMixer malware drops a number of malware files to the compromised machine. These malware families may include backdoors, bankers, credential stealers and so on. Also, it can download a huge number of Trojans at once, which can lead to a large-scale infection of any computer network.

After the user extracts the archived file with the password, the user runs the installer and executes the malware. Malware drops a wide variety of malicious binaries to infect the machine with, such as backdoors, bankers, downloaders, spyware and many others.

Kaspersky security solutions have blocked attempts to infect more than 47,500 users worldwide. Some of the most targeted countries are Brazil, India, Russia, Italy, Germany, France, Egypt, Turkey and the United States.

“This threat can always be avoided by using only licensed products and robust security solutions,” says Haim Zigel, security researcher at Kaspersky.