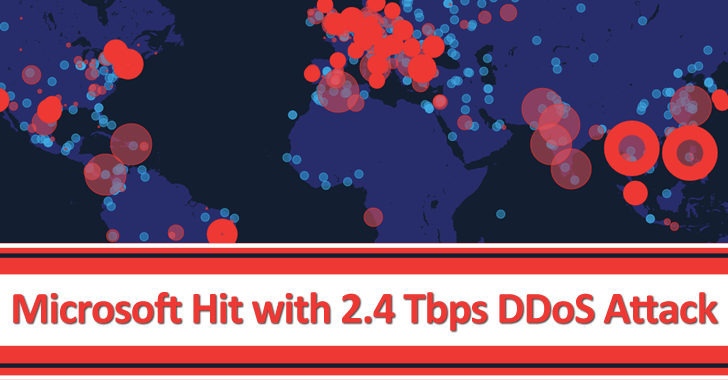 Microsoft recently proclaimed that they have witnessed a 2.4 Tbps DDoS attack in August this year, and it’s the largest attack ever recorded till now. Since the early one was recorded with a volume of 2.3 Tbps, which was already mitigated by AWS.

This huge attack was targeted on Microsoft Azure clients in Europe and it was 140% higher than the maximum attack bandwidth recorded by Microsoft in 2020. For more than 10 minutes this huge DDoS attack has lasted and it reached a peak of 2.4 Tbps, 0.55 Tbps, and 1.7 Tbps.

However, the Microsoft Azure platform managed to mitigate this largest distributed denial of service (DDoS) attack which reached traffic peaks of 2.4 Tbps and was able to stay online during the attack.

On distributed DDoS detection and mitigation pipelines the DDoS protection platform of Microsoft Azure was built, and due to its build, it can easily absorb tens of terabits of DDoS attacks.

So, with the absorbing capacity of this level, Azure’s DDoS protection platform protects all its users and its platform from this type of massive DDoS attack.

Apart from this, to implement fast fixes, the DDoS mitigation feature of Azure continuously monitors the infrastructure across the whole network at several points.

While attacking traffic is originated from more than 70000 sources and several countries in the Asia-Pacific region, and here they are mentioned below:-

In 2021, the number of DDoS attacks increased deliberately on Azure, but, here, most of the attack flow is dropped to 625 Mbps.

However, Microsoft has not yet named the target of the attack on the Azure consumer in Europe, but, it clearly depicts that to spread malware and compromise company systems it can be easily used by the threat actors as cover for secondary attacks.