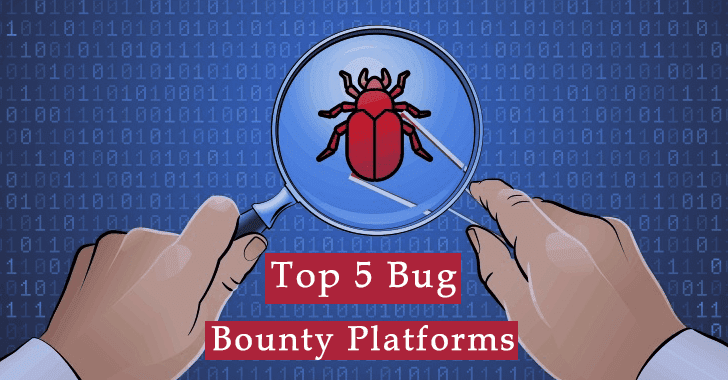 Before you start reading this article, you need to know what is all about Bug Bounty platforms? This is the platform where the software gets used to deploying the bug bounty program. It is also a program offered for the private individual who finds the bugs and vulnerabilities in the web application, vulnerability management, and effective crowdsourcing flaw.

Maximum business uses their bug bounty platforms to supplement their in-house QA and effort of bug finding. This type of program is really precious where businesses can test the bugs without exposing sensitive information, and the bug bounty platform can work on the complete application.

These platforms also include penetration services where businesses can see the vulnerabilities before exposing them to the bad actor.

The State of Security published a most recent list of the bug bounty frameworks. Many organization and government together launched their vulnerability reward programs. Here you will get the five essential lists of the Bug Bounty Platforms.

HackerOne is one of the best hacker-powered security platforms launched in 2013. This bug bounty program covers a total of nine different domains of the company’s website.

It helps an organization to find the critical vulnerabilities and fix those before it becomes exploited. HackerOne makes the websites very clear accepting the bugs and laying the outside of the bug bounty program.

As an example, HackerOne only mentions third-party data, which is sensitive and vulnerable. It also can affect the company’s service and other threats, which makes jeopardizes in HackerOne.

Bugcrowd is one of the best-managed services which allows customers to do onboard, scale Bug Bounty Program, launch, and many other things. It also helps to maintain a healthy relationship with other external researchers (security).

This is also capable of managing the incoming reports of vulnerabilities and pay the researchers. It also focuses on the result that supports for rapid risk reduction, lower operational overhead, and cost control.

This also does the partnering with the cloud-sourced established security platform to quickly eliminate the overhead and reduce the risk. Since Bugcrowd is programmed with code, researcher lovers can test this on mobile apps, hardware, web apps, IoT, etc.

This is one of the best bug bounty platforms that help companies to reduce the risk of cybersecurity. It also uses the power of the global hacker community effectively. The members of HACKRATE have made this platform so that users can effectively do the ethical hacking, bug bounty program, and penetration testing.

They are also passionate about creating a leading bug boundary platform with the expert hacker community. They find the new bugs very quickly and fixed them as soon as found them.

The vulnerability of an IT system has to be undiscovered so that valuable data can stay in danger. This is the reason where bug bounty can become a primary standard for any security testing.

HackenProof is the coordination platform that includes Bug Bounty and Vulnerability. Here users connect to their customers with the global hacker community to uncover the security issues of their all products.

You can run the custom-tailored bug bounty program, which can help the customers to reduce the risk of losing data by cybercriminals. There are few programming rules which be followed. The user has to avoid to compromising personal data and degradation of any other service.

If you catch any valid bug for the first time, then it is eligible for the rewards. As a user, you can not disclose the public and vulnerability till your permission becomes granted.

To set your bug boundary program, you need to create an intigriti program lifecycle where you need to make your program by defining the scope of the program. You can also need to set the rewards and adjust the rules, and in that, every bug bounty will support and respect you.

As soon as you launch the program, you will get a valuable security vulnerability report, and this will be given by the researcher community. This community server will pass every information you request and the team will make sure that you get only quality.

Every industry has to work with teams of every shape, size, and security. All information is confidential, and it has to be safe. This is industries responsibility to strengthen the process. Here you will get the five bug bounty platforms that will discover the cybersecurity risk.

These bug bounty platforms, which helps the companies to reduce cybersecurity risks by using the power of a global hacker community.