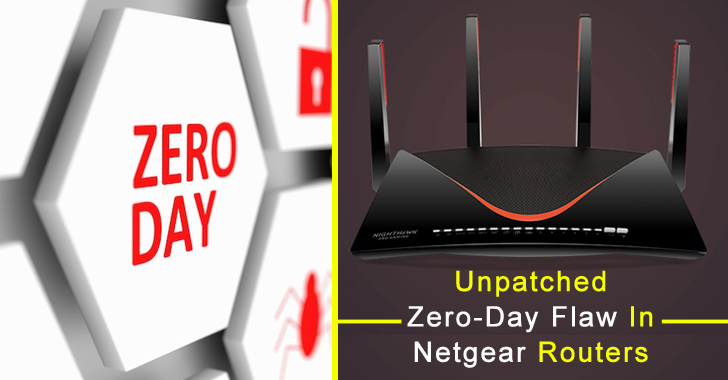 Two cybersecurity researchers, Adam Nichols from GRIMM and d4rkn3ss from Vietnamese ISP VNPT has discovered an unpatched zero-day flaw in 79 Netgear router. This flaw allows hackers to take full control of the device, and both the researchers have disclosed this vulnerability independently and already informed about this flaw to Netgear.

Soon after knowing about the vulnerability, Netgear confirmed the quick arrival of a patch. Since the vulnerability attack the incoming data that are handled by the Netgear, that’s why the flaw would enable an attacker to build a specially crafted string that will perform commands on the router without requiring any authenticate.

According to the reports, the vulnerability affects nearly 758 different firmware versions that have been applied on 79 Netgear routers over the years, and some firmware versions are used on devices published in 2007.

More importantly, the bug remains in the web server component that’s injected in the vulnerable Netgear router firmware. And the web servers are used to control the router’s built-in administration panel. While in this event, 79 routers of Netgear has been affected by this vulnerability.

The vulnerability happens before the Cross-Site Request Forgery (CSRF) token is verified. Therefore, this exploit can also be followed through a CSRF attack, and if the affected router browses to a malicious website, that website could utilize the user’s router.

Detecting the version is one of the essential parts of the vulnerability, as the exploitation can undoubtedly be performed is to remotely identify the model and version of the router that has been attacked.

It will be useless for an attacker to remotely fingerprint a device, as the exploit that has been detected for this zero-day flaw can automatically determine the model and version targeted by the attacker using this strategy.

Router models that are affected by this zero-day security flaw

There are a total of 79 router models that are affected by this zero-day security flaw, and here they are:-

We all know that routers are one of the essential security boundaries that block attackers from directly utilizing the computers in a network.

Although, due to the weak code feature and a reduction, the inadequate analysis has ended in thousands of vulnerable SOHO devices being revealed to the internet for over a decade.

NERGEAR advisory report says that they are working for the fix on additional hotfixes and final firmware fixes for all affected products.

Also they recommended users to : Turning off Remote Management on the router or gateway Web GUI significantly reduces the risk of exposure to these vulnerabilities.

You can discuss more in this thread in the NETGEAR community where you get assistance users in a more interactive basis.

“NETGEAR is committed to maintaining the security of our products and we monitor for both known and unknown threats, which includes being proactive to potential risks,” NETGEAR told Cyber Security News.

What is ICMP Protocol – How do ICMP works,...