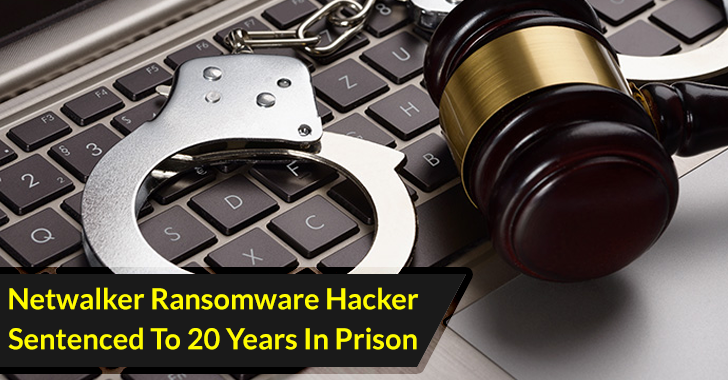 There has been a conviction in the U.S. of a former affiliate of the Netwalker ransomware, Sebastien Vachon-Desjardins. A Tampa company and a number of other entities were attacked by him.

This led to Sebastien, a 34-year-old Canadian being sentenced to 20 years in prison and demanding $21,500,000 in forfeitures.

A Florida court sentenced Sebastien and he was extradited from Quebec. Hundreds of victims worldwide have been victimized by Sebastian, who gained illicit financial gains from them, and the victim list includes:-

Sebastien Vachon-Desjardins was sntenced after pleading guilty for commiting:-

It is believed that the defendant in the case was able to exploit hundreds of victims in numerous countries to exploit them during a time of international health crisis by making use of sophisticated technological means.

Vachon-Desjardins was extradited to the United States from Canada, where he had been working for the government as an IT engineer. He was sentenced to six years and eight months in jail by an Ontario court just a month earlier.

During the arrest operation the Canadian law enforcement officers seized the following things:-

The Netwalker ransomware was launched in 2019 as a RaaS operation. The goal of the operator was to recruit affiliates to deploy the ransomware for 60-75% profit on all the ransom payments.

In connection with the ransomware operation, Vachon-Desjardins acted as an affiliate. In addition to US companies, at least 17 Canadian entities are believed to have been targeted by him.

A ransomware attack takes advantage of corporate systems to steal data and to eventually encrypt devices and entire networks. As a result, the threat actors extorted the victims into paying a ransom demand so that they could recover files and prevent data from leaking.