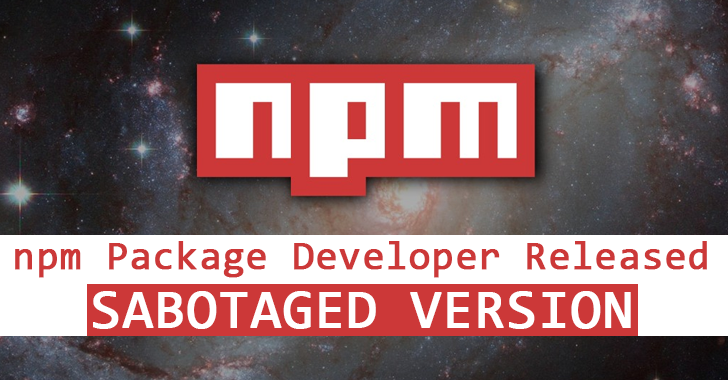 Several weeks ago, the developer of the “node-ipc,” a popular npm package with more than a million weekly downloads has protested the Russo-Ukrainian War by releasing sabotaged versions of the library. Due to this escalating situation, the open-source and software supply chain is under security concern.

A developer’s machine began to have all data and files deleted and overwritten by the ‘node-ipc’ package in newer versions, and not only that even also leaves new text files with peace messages.

Moreover, this npm package is used by all the primary and prominent libraries like Vue.js CLI.

By targeting users with IP addresses located in Russia or Belarus and wiping arbitrary contents of files, the alterations introduced by RIAEvangelist affected the following versions of the library:-

These malicious versions are tracked under the:-

Apart from this, among the most prominent node modules, node-ipc allows locally and remotely controlled inter-process communication (IPC) on all the major platforms:-

The developers likely created the packages primarily as a peaceful protest, since they add a “message of peace” to the desktop of anyone installing them.

A major update, 11.0.0, was pushed just after less than 4 hours, removing the destructive modifications from the library but adding another dependency, “peacenotwar.”

Based on its base64-encoded strings and obfuscation tactics, the code within the ‘node-ipc,’ specifically file “ssl-geospec.js,” tries to disguise its true intention and goal.

Using a simplified version of the code the cybersecurity researchers demonstrated how this code will overwrite all the files present on the system of the users of Russia and Belarus with a heart emoji in order to delete all data.

Here’s what the Director of Developer Advocacy, Liran Tal stated:-

“At this point, a very clear abuse and a critical supply chain security incident will occur for any system on which this npm package will be called upon if that matches a geo-location of either Russia or Belarus.”

Moreover, in the latest version of node-ipc released on March 15, 2022, “peacenotwar” package is bumped from 9.1.3 to 9.1.5; the color NPM library is bundled with “colors”, while STDOUT console messages are removed.

While in response, some criticized the ‘node-ipc’ developer for deleting and editing previous comments on the thread to attempt to ‘cover up’ his tracks.