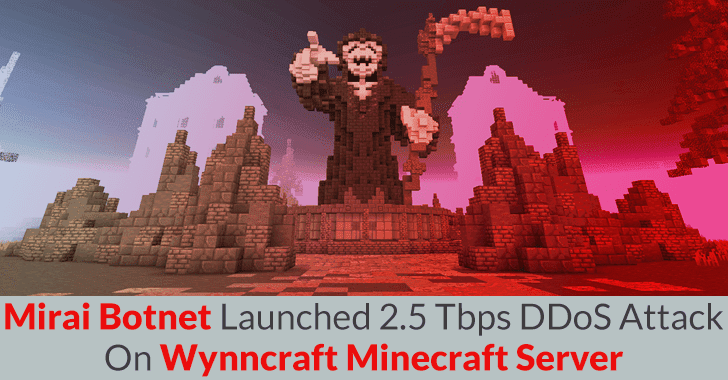 An attack initiated by the Mirai botnet against Minecraft server Wynncraft was blocked by Cloudflare in Q3 2022 in which 2.5Tbps of DDoS was launched.

When DDoS attacks are conducted at a higher bit rate, they tend to be more effective and more widespread. This attack consisted of UDP and TCP flood packets since there were multiple vectors involved in this attack. And the most shocking thing is that an attack of this size lasted for approximately 2 minutes.

As part of these attacks, large amounts of data from many different sources are gathered in order to overwhelm online services in order to make them unreachable.

In today’s world, DDoS attacks with multiple terabits of bandwidth are becoming more and more common. An attack that peaked at 3.47 terabits per second in November 2021 was one of the largest ever reported DDoS attacks.

In its report for the third quarter of 2022, Cloudflare has revealed this brand-new Minecraft attack.

Over the course of the last year, the Mirai botnet and its variants have been generating more DDoS attacks, and this has been one of the most worrying developments.

There has been a dramatic increase in the number of DDoS attacks targeting the gaming industry over the last few months.

Compared to the previous quarter, the number of Mirai-related attacks increased by 405 percent, which is a significant difference in volume.

In the past few months, there have been various DDoS attacks, but the following are some of the most notable ones:-

In terms of HTTP DDoS attacks, the following countries were most targeted:-

The majority of network-layer attacks target mainly the following countries:-

Therefore, it is imperative that always-on automated security solutions are developed in order to meet this need. As there is simply not enough time for security teams to respond in a timely manner.