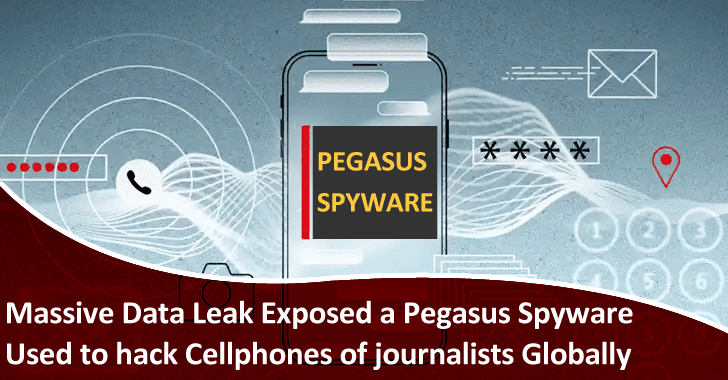 Recently, in a serious investigation, several security experts from the Guardian and The Washington Post along with Amnesty International and Forbidden Stories have detected traces of Pegasus spyware in journalists’ cellphones, that was being produced by the Israeli company NSO Group.

After the investigation, the experts have found that the Pegasus spyware has generated a Leaked list of 50,000 smartphones of high-profile targets.

However, the list of 50,000 high-profile targets includes all kinds of:-

The presence of Pegasus spyware was detected on Android and Apple devices in 2016, and after the revelation of this NSO Group’s flagship product has been linked to the murder of well-known Saudi journalist, Jamal Khashoggi.

Now following the murder of Jamal Khashoggi, the investigation has inferred that at least 37 smartphones of several other journalists and their relatives were infected with the Pegasus software.

By exploiting several security flaws in both Android and iOS the operators managed to obtain a database with 50,000 numbers of citizens from all over the world.

Here, the list doesn’t notify who has decided to place these numbers, but what it makes it clear is that it depicts the objectives of the different countries that would have contracted the NSO Group’s services.

However, after getting the results of the investigation the experts pronounced that the zero-day exploit generally infects the devices of high-profile targets.

The experts also noted that some Pegasus were utilizing the license actively for cross-border inspection and in many other countries along with a record of offensive behavior by state security services.

This was one of the biggest attacks all over the world, and the governments of the world were soon captivated by such a large tool spyware attack. Apart from all these experts also asserted that this spyware is proficient in monitoring remotely with the help of a microphone and a camera.

The abilities that Pegasus spyware offer its operators to do and access on any infected Android and iOS devices:-

Security researchers of Citizen Lab have separately observed that the NSO Pegasus spyware was being extended on an iPhone 12 Pro Max. According to the investigation, the experts claimed that this spyware has targeted the iPhone having the iOS 14.6 version, and it is the latest version.

While later they confirmed that the threat actors have hacked through a zero-day zero-click iMessage exploit, and the most important part of this attack is that it does not need any kind of interaction from the target.

However, this is not the first time when the Pegasus spyware conducted any attack, this spyware was previously observed in 2019, and now again in July 2021.

But, apart from this, the security researchers are trying their best to get all the details of this attack, however, this is quite dangerous, and this attack has made a lot of damage to the privacy of the victims.