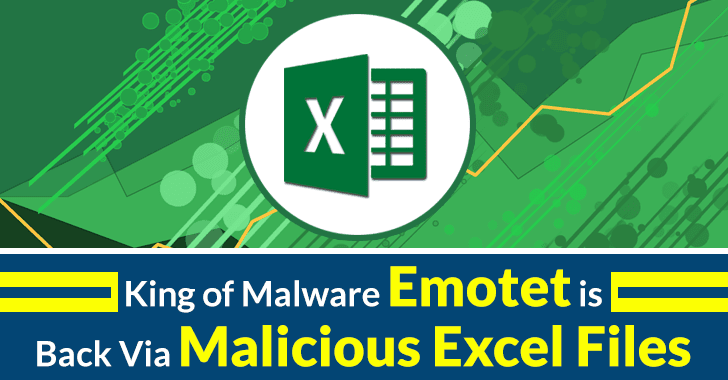 Emotet is considered a kind of malware family among the malware research community due to its footprint and aggressive distribution method for a long while since 2014. it was developed to steal sensitive and private information from various sectors, including Educational institutes, government, defense, IT, Telecom, and also millions of individuals around the globe.

Malware developers and affiliates behind Emonet have used a different method of distribution and employes Microsoft Offices documents in a common way that was predominantly used in previous attacks.

Based on the common characters identified in this Emotet campaign, researchers believe that the attackers are distributed using random malicious emails with attachments and disperse the email along with white text in the excel sheet, which consists of multiple formulas.

Attackers are using a variety of different characteristics in each and every campaign identified in the recent past.

Let’s break down the following notable technique that was identified by Ahnlab researchers and reported to Cyber Security News.

Unlike previous methods in which attackers trick users into directly enabling the Macro, Emotet has employed the following methods in the previous attacks.

Attackers behind the Emotet now changing the methods to Enable Macro and forcing victims to re-launch the document with the following statement:

In accordance with the requirements of your security policy, to display the contents of the document, you need to copy the file to the following folder and run it again.

In the second scenario, attackers included the Formula Macro before hiding the sheet and employed the sheet protection on it to ensure that the victims can’t view the included formula macro.

Users are advised to refrain from opening document files from unknown and untrusted sources.