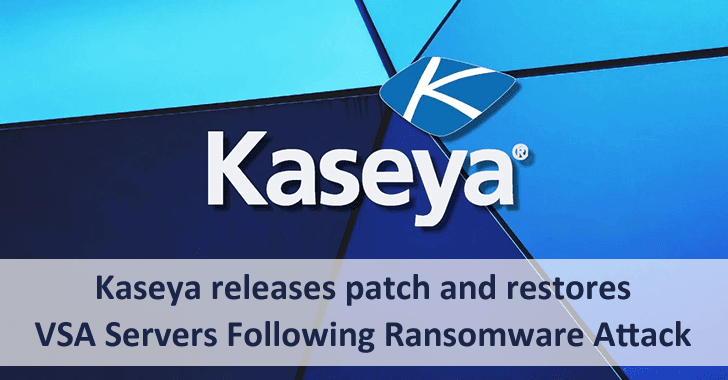 Kaseya released some emergency updates on July 11, and these updates also fix the vulnerabilities that are present in the Virtual System Administrator (VSA) software, which has affected 1500 companies around the world.

However, this ransomware attack has affected hundreds of companies all over the world, but luckily Kaseya has restored its servers. After completing the restoration process, the company claimed in the report that after several days of delay they have successfully recovered all its servers.

After encountering such ransomware attacks, Kaseya has requested all its VSA customers to shut down their servers until and unless a patch comes.

Luckily Kaseya discovered the VSA 9.5.7a (9.5.7.2994) update and it comes with patches that fix the vulnerabilities which have been used in the REvil ransomware attack.

However, with this new update, Kaseya has fixed mentioned below vulnerabilities:-

According to the report, the company has fixed three on-premise VSA bugs, and here we have mentioned them below:-

As we said above that after few weeks of the attack, Kaseya has luckily restored its servers. However, after restoring its servers, the company stated that they will keep publishing updates on different progress and they will also provide a proper implementation of the (security) patch.

According to the experts, this ransomware has attacked a major Swedish supermarket chain, that consists of 800 stores all around the world, and not only this but this attack has also affected several businesses in at least 17 countries.

Worried about Cyberattacks!! here is the all in One Security Platform that can help you secure your Cloud Web Applications and Data.