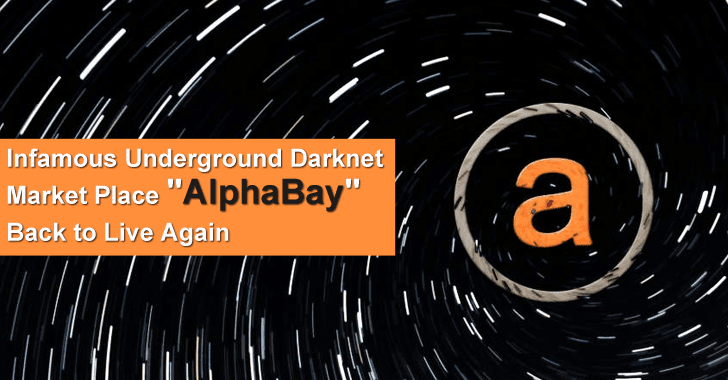 Recently, the security researchers of Flashpoint have detected that AlphaBay has been re-emerged once again. However, AlaphaBay is one of the biggest underground Darknet Market Place and communities till now.

Initially, this marketplace was seen active from 2014 to 2017, and later in 2017 it was being shut down by law enforcement agencies. The most important point is that it’s one of the administrators Alexandre Cazes who was the main operator of Alpha02/Admin was arrested.

However, the report claims that they have found a new market site displaying that name is now available through the anonymizing Tor browser, and not only this but it was also accessible through I2P an anonymous, peer-to-peer allocated communication layer.

After the law enforcement arrested Cazes, the authorities stated that he accumulated nearly $23 million, and Cazes had his market carrying a commission of 2% to 4% on every transaction.

The security researchers from Flashpoint started the investigation, and have found many details about it, such as the new AlphaBay is found to be operated by some other administrators, this new marketplace has got threat actors that are operating all the operations under the alias “DeSnake.”

However, after investigation, the analysts came to know that DeSnake has claimed that they are returning back to the forum due to the wretched state of operating darknet marketplaces.

Moreover, they also came to honor the legacy of the previous moderator Alpha02 who was Alexandre Cazes, as per the news Cazes has committed suicide in Thailand soon after the authorities arrested him for operating the marketplace.

DeSnake stated in one of their reports that they have created a system named “AlphaGuard” and it will generally enable the threat actors to operate all the operations on the forum so that they can easily withdraw funds.

The most interesting part of this new marketplace is that they can collect all the funds even if the servers get seized.

According to the report, the analysts have found several darknet markets that contribute to escrow systems. This kind of marketplace generally holds buyers’ and sellers’ funds to stop nonfulfillment.

Apart from this, the cybersecurity experts have claimed that this new AlphaBay’s version is a decentralized system, which is named “AlphaGuard,” and Desnake has claimed to offer protection against both exit scams and takedowns in this new darknet marketplace.