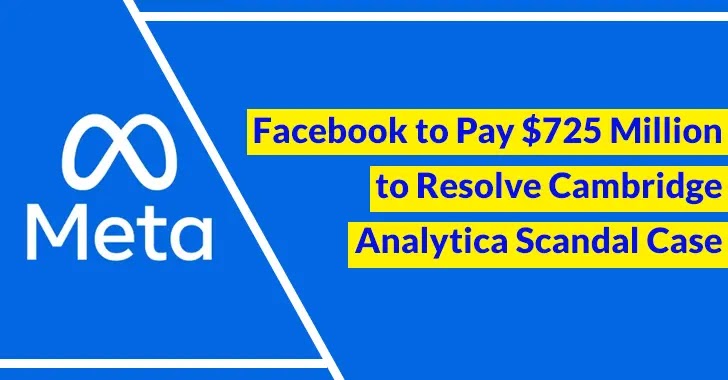 There was a class-action lawsuit filed against Facebook which is owned by Meta Platforms Inc claiming the social media network had intentionally facilitated the access of user information, including the data of Cambridge Analytica, to third parties.

However, Meta Platforms Inc has recently announced that they have agreed to pay $725 million to settle the lawsuit.

87 million Facebook users’ data was accessed by Cambridge Analytica in 2018 and Facebook intentionally gave access to this firm, which prompted this long-running lawsuit. Although this lawsuit has been dragging on for quite some time, this proposed settlement would now be able to bring it to an end.

It is believed to be the largest settlement ever reached in a class action data privacy lawsuit in the U.S., according to lawyers for the plaintiffs. Furthermore, the amount of money paid by Meta for the settlement of a class action lawsuit is the most it has ever paid.

The class will benefit from this historic settlement in this complex and novel privacy dispute. In its settlement with the federal judge in San Francisco, Meta didn’t admit wrongdoing and the settlement stands as a condition of the judge’s approval.

One of the companies involved in Donald Trump’s successful presidential campaign in 2016 was Cambridge Analytica, now gone. It has been found that the organization gained access to millions of Facebook accounts and used that information for the purpose of profiling and targeting voters.

There were a number of government investigations into the company’s privacy practices resulting from the Cambridge Analytica scandal. Even as a result several lawsuits were filed against the company and Meta Chief Executive Mark Zuckerberg was interrogated by U.S. lawmakers in a high-profile congressional hearing.

A US Federal Trade Commission investigation of Facebook’s privacy practices led to $5 billion in fines and $100 million in settlements with the Securities and Exchange Commission over allegations of misinformation about how users’ information was used.

Attorney general investigations are underway, and the company is defending itself against a lawsuit brought by the Washington, D.C. attorney general.

It has been alleged by the lawyers of the users that Facebook misled them into believing they could keep control over the data they had entered. But, in reality, it had allowed thousands of outsiders to access their data.

It is estimated that 250 to 280 million Facebook users will be covered by the settlement. Each individual will receive a share of the settlement depending on how many valid claims are received.