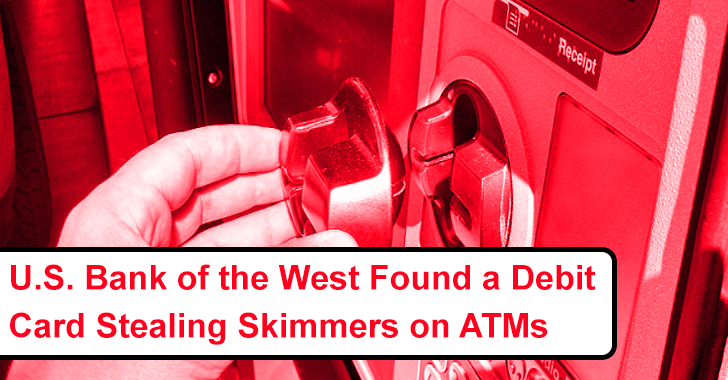 Bank of the West has recently warned all its customers that skimmers have been installed on several of its ATMs. This allows thieves to get the debit card numbers and PINs of bank customers.

Initially, a wave of suspicious withdrawal attempts that originated in November 2021 was identified by the bank. However, a more in-depth investigation has been conducted by the bank in coordination with law enforcement to get a proper conclusion.

The bank received several reports of unauthorized withdrawals from their customers’ accounts at several of their ATMs on November 10, 2021. While a review of their ATM network has already begun as a precautionary measure after the bank contacted the law enforcement.

It has been determined that several of their ATMs have been compromised with what is known as an ATM skimming device. Between November 10, 2021, and April 18, 2022, there was a period during which the investigation and discovery process happened.

ATM skimming devices can pick up information from your following financial items:-

As a result of the skimming device attached to the ATM, the normal debit card transaction was interrupted, allowing counterfeit cards and data to be stolen.

In short, it can be assumed that this could lead to the creation of fake debit cards and cash withdrawal attempts at ATMs.

It is claimed by the bank that it has managed to stop the abuse of stolen information that was used for fraudulent purposes, as well as actively monitoring all compromised accounts.

Bank strongly recommended its customers to immediately block their compromised debit cards. Moreover, as compensation, the bank has confirmed that it will provide credit monitoring and identity theft protection for free of cost to all the affected customers.

Here below we have mentioned all the features of the complimentary service, “Identity Guard”:-

As long as you notify the bank promptly as possible, you will not be liable for any such transactions. Be sure to review all of your account statements carefully to ensure that nothing suspicious has been occurring.

Moreover, the Bank’s customer service line can be contacted in case you find anything suspicious or fraudulent on your account.