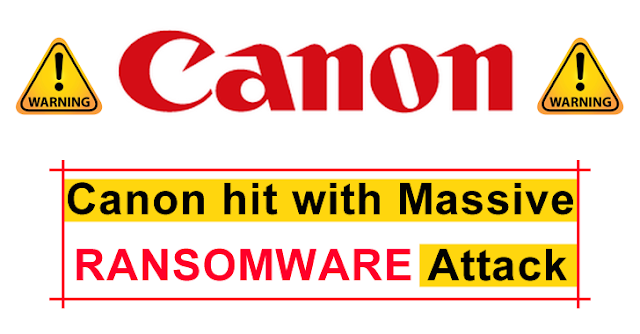 Recently, the ​Canon has undergone a ransomware attack that has a very large influence on various services of Canon, like its email, USA website, Microsoft Teams, and many other internal applications.

Canon sent an internal alert to all its employees in which it has unveiled the ransomware attack. Apart from this, Canon is closely investigating the whole matter so that they can conclude about the issue.

But, apart from this, until now, Canon was addressed as one of the high-profile victims of this ransomware.

Canon notified the customers with the notes “wide spread system issues affecting multiple applications, Teams, Email, and other systems may not be available at this time.”

The experts have detected and confirmed the ransomware; it’s maze ransomware that has attacked Canon, which has let the company undergo a global service interruption that traversed multiple days.

Not only this, but the maze ransomware has also tried to attack Canon earlier; they have been attempting to steal all encrypted data of companies including LG, Xerox, Cognizant, and many others. Maze ransomware has claimed to steal 10TB of data from the private database of Canon.

Moreover, the threat actors also said that they had downloaded several private data from the Canon networking system. The US website of Canon is now displaying errors or pages not found stains when they visited.

The Canon domain that got affected by the threat actors are listed below:-

10TB of data From Canon

Image.canon stated that the threat actors have stolen a total of 10TB data from Canon, along with some private data from the private database of the networking system.

The maze is enterprise-targeting human-operated ransomware that negotiates and spreads healthy negotiation through a network until it obtains access to an official account and the system’s Windows domain controller.

The Maze operator reveals all the data that they have stolen from the networking site if the victim does not contact the threat actors. Canon has confirmed that they have undergone some recent issues, Canon’s image.canon cloud storage service.

But the maze operators confirmed that they are not responsible for all these current issues. While the experts are still investigating the whole matter, and they are trying to obtain all the stolen data safely.