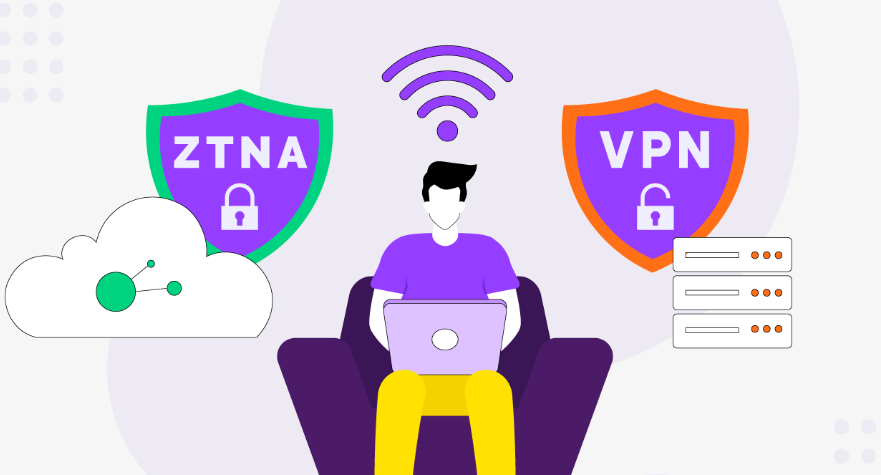 Network security has always been about securing employees on site. IT admins never had to worry about the term “remote access” until the pandemic occurred. Since then, organizations have moved their resources into the cloud and have had to rethink the way they granted access.

39% of workers use their personal devices to access corporate data. If a single device is unsecured, a malicious actor may be able to enter the network and cause a major breach.

Traditional VPNs are simply not effective when it comes to securing workers and third-parties beyond the physical perimeter. Zero trust network access (ZTNA) breaks down the security barriers of a traditional VPN.

ZTNA is based on the principle of least privilege, which requires that users only have access to the resources they need to do their job. This approach minimizes the attack surface and reduces the likelihood of a breach.

Zero trust network access is much easier to implement and manage than a VPN. With a VPN, you need to set up and configure each individual user’s connection. Things become more complex if there are multiple branches. Think of an enterprise that has many branch locations spread out across different continents, not just U.S. states. With ZTNA, all users connect through a central gateway with specific access based on roles, making it simpler to manage from anywhere.

Another advantage of zero-trust network access is that it prevents against major external attacks. VPNs are susceptible to a number of attacks, such as man-in-the-middle attacks and DNS poisoning. Zero trust network access uses high-level encryption and other security measures to protect data in transit, making it much more difficult for attackers to eavesdrop and steal sensitive information..

Zero trust network access is also more scalable than VPNs. This is because it doesn’t require additional hardware or software to be installed at each location. Zero Trust policies can be easily implemented across a large enterprise without the need for expensive infrastructure upgrades or contractor consulting fees if you need to outsource IT for different locations.

One major feature of ZTNA is the ability to microsegment workloads and defined security controls to prevent lateral movement attacks within your network. Access is granted on a “need to know” basis, drastically limiting the attack surface. Microsegmentation helps isolates users and environments from each other. Less communication results in less risk of a breach.

ZTNA provides much more comprehensive authentication than VPNs. With ZTNA, users are typically authenticated by Multi-factor authentication (MFA) or a process known as SAML, which stands for Security Assertion Markup Language. SAML transfers identity to the service providers with a single point of authentication. SAML also works together with SSO, giving admins more control over the authentication process.

VPNs have high latency as data must be routed before it reaches its final destination. Imagine this scenario. Maria is based in New York and needs to access internal resources from the company’s headquarters in Los Angeles. The data packets need to be transferred across the country, thus increasing response times to reach the destination servers across the country.

ZTNA routes traffic through a central server, minimizing downtime and latency to improve both speed and reliability, and ultimately providing a superior user experience (UX).

Add the Extra Layer of Remote Security with ZTNA

Zero trust network access is a more secure approach that offers many advantages over traditional VPNs. It is easier to implement and manage than a VPN, provides more secure connections, and is more scalable than a VPN.

There’s no question that zero-trust network access is the more secure option when it comes to connecting to your corporate network in the dynamic hybrid work model. If you’re looking for a way to improve remote security and reduce your costs, ZTNA is the clear winner.